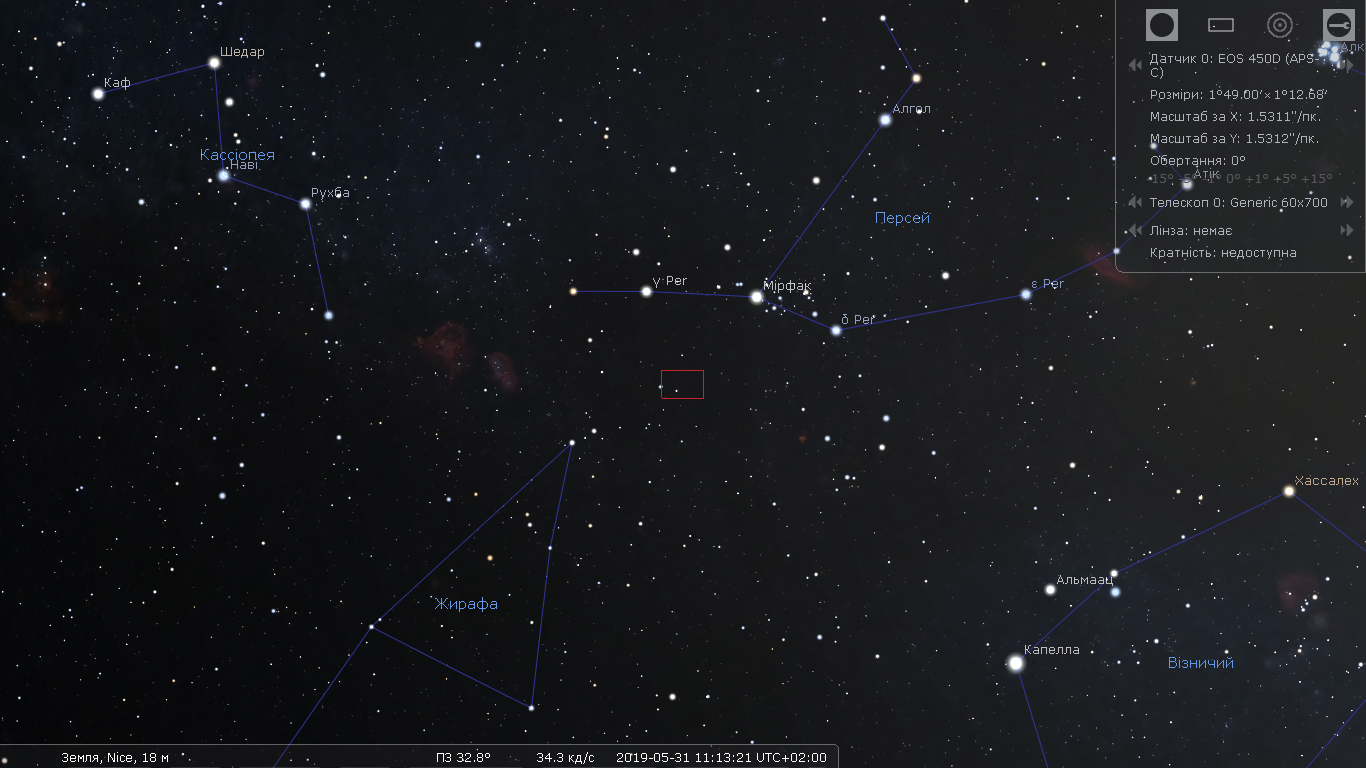 In this project, I aim to detect only one pulsar - B0329 + 54. It is the most powerful radio pulsar in the Northern Hemisphere. It is located in the constellation Camelopardalis ( Girafe ) and should be easy to find.

The pulsar emission spectrum is wide, however, in most cases, the pulsar is monitored at two frequencies: 400MHz and/or 1400MHz.

I chose 400 MHz because there are some advantages to work at low frequency:

However, the dispersion of the signal is larger (the pulse spreads over a period and becomes more difficult to detect). Also, the EM noise is larger and you may need to install a telescope far from the city, which requires a telescope to be portable.

When the signal travels through the interstellar space, the signal disperses and so the longer waves arrive with a delay:

DM is a measure of the dispersion and the frequency is in MHz. Since the path from each of the pulsars to the Earth is unique, so the measure of dispersion is unique for each pulsar too. The greater the dispersion, the more blurred the pulse over the period will be. However, there are a few techniques for signal dedispersion.

The signal travels not just through the interstellar vacuum but through the turbulent interstellar medium. This leads to constructive/destructive interference of the pulse wavefront. Let's consider a simple case when we have the diffraction on the circular aperture: when the light passes through it, on the screen you will see a beautiful Airi disk. Now instead of the aperture with clear borders, there is an interstellar medium that distorts the wavefront of the signal and on the antenna of the radio telescope instead of a beautifully clear picture, there is a map of light and dark spots. And as this interstellar environment (space weather) moves, this pattern changes too. It is somehow similar to the terrestrial observations through the earth's atmosphere in the optical range.

As a result, the pulse-to-pulse amplitude is different (as for an example look at the first video on the page). This effect is called scintillation. The pulsar signal may disappear for a while, but this is a characteristic time for which it disappears and appears is lower at lower frequencies, so the results of the measurement will be more repeatable from one observation to another.

The polarization of the pulsar radiation should also be taken into account. For each pulsar, the polarization is different. Hopefully, for B0329 + 54 the radiation is relatively linearly polarized. Traveling through the interstellar medium, the Faraday polarization vector "rotates in space". Therefore, it is unlikely to orient the antenna to the "correct" position, but it is better to wait until after some time it returns itself, although the choice of "good" orientation of the telescope can reduce the influence of local radio interference.

For B0329 + 54 the maximum bandwidth is limited by dispersion and it is 1MHz.

, the observation time of 1 hour and bandwidth of 1 MHz, so we can derive minimum gain of the antenna from radiometer equation:

The dependence of the antenna gain

in the radiometric equation on the bandwidth:

so we get that the minimum gain for the 1MHz bandwidth is 14 dB. Of course, this value is theoretically minimal and the actual gain of the antenna should be at least 14dB, or even 17 or 19dB.

In fact, the radiometric equation requires an improvement:

That is, the noise of high-frequency interference (radio, television, communications, equipment) is significant. It is difficult to place the antenna far from interference and this is a significant problem for amateur radio astronomers with small antennas. However, observation times and hours are usually unlimited. Radio surveillance at night is cleaner, due to fewer devices in use.

Noise from the ground, buildings, trees are added through the sidelobes of the antenna sensitivity pattern, which also does not help in observations.

I highly recommend reading this link. Much of the info here and in the previous notes were taken from there.